The Hell Race – I Am The One And Only

It all started with the Marathon des Sables running through the Sahara desert, but that wasn’t enough, so I went to the Amazon Jungle to take on the BTU Jungle Ultra but still, I needed more…

So for race three, I harbour a desire to see the Himalayas (well run in them) so, I look at the Everest trail race but it’s way outside of my budget (both the real and the fake budget), so maybe that is it for crazy running races until an advert for The Hell Race pops up on Facebook – sounds ideal, a terrible name and cheap too. So I send a large number of rupees to a man in India, who I have never met. What could possibly go wrong?

The journey to India has begun to run five marathons in five days through Himachal Pradesh – I break the news to my wife – she is not impressed. She is less impressed when the altitude training machine arrives, big noisy and very annoying when people are trying to watch TV. I get a message after signing up, praying that I haven’t booked my flights yet as the race has to be delayed by a week as the road has yet to be cleared and opened after some huge snowfall! 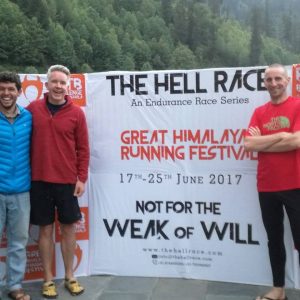 I travel to India in 2017, the flight is straightforward, but then I have to endure a 15-hour bus ride – this is travelling cheap! To top it off, I take a terrifying tuc tuc journey to the hotel. My fellow competitors are David an Australian man who has climbed Everest and Lowell, an American living in India. Lowell is there with his girlfriend Mary Rose who seems confused when I ask her if she was named after the Elizabethan warship! They are all amused to find I only live at 80 feet of altitude.

After a day or two of acclimatisation, we take the steep drive up to the camp before the race. A day spent dodging cars, bikes and the occasional cow!
The Hell Race Day one looms, we get transport from the camp to the start –the start line is a simple spray-painted line on the road with GHRF (Great Himalayan Running Festival) above it, a plain start to an epic race – I get to the top of the first summit which was bleak, grey and cold. I put my hand on the sign for Rohtang La – the paint is wet and I have a yellow hand as a souvenir.

On the way down, the road changes from nice tarmac to a dirt road (I remember being told that you can’t go wrong) so, I ask the soldier at the checkpoint who directs me to the office. The commander asks me for my passport (I don’t have it), my visa (I don’t have it), then he asks, “what am I doing here“. “Running a race,” I say, “ok, where is everyone else,” The commander asks. At this point, I realise that I hadn’t seen anybody for a while (they are held back by a landslide).

He asks me to follow him into the alleyway by the side of the building – at this point, the race director arrives with the paperwork and I am saved. I finish the stage first – it’s a little further than the 26.2 miles but nothing I can do about it. We all complete the stage and drive 70km to a hotel called The Yak where no one speaks English but the sign says hot water between 7 pm and 9 pm. It’s short-lived after I grab the first shower.

The next day we are stopped en route to the start – again we are not carrying our passports but the support vehicle arrives to save the situation. We get to the start at the exotically named Zin Zin Bar which is no more than a group of tin sheds. We start the 18km climb. The air is thin at 4900m – it starts to snow but, I keep my sunglasses on because of the glare. I feel isolated but, then the other two come into view. I catch them up and we walk the last 9 miles together. We are forced to walk past the tented campsite and double back to make up the miles missed (yesterday’s extra miles don’t count). 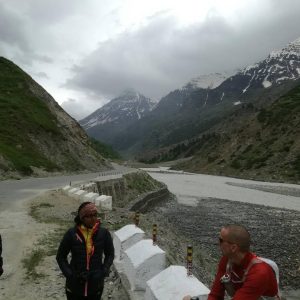 I am cold to the core, so I am wrapped in a duvet, waiting to get warm. The usual morning high altitude chaos occurs; one of the cars won’t start as if they are starved of oxygen.

The Hell Race Day 3 is the Gata Loops 21 switchbacks and a climb up to 5000m when I reach the top I am spent. Luckily, I am rescued by Ankip, one of the event team members who insist that carrying on is possible – I don’t want to give up but, I just can’t see how I can keep going. The doctor tests my blood oxygen which is super low! On the way down a large hail storm kicks off and we take shelter in a roadside tent for Chai and Noodles. On the way to the finish, I’m nearly run over by a truck and have to drop into the gulley to escape possible death. This is a tough environment to be in. I finally complete the stage and we drive to the Hotel for the night. The hotel comprises two rooms – one for eating and one for sleeping at 4600m there isn’t much sleeping.

The Hell Racel Day 4 starts with a short car drive to the start, I am rough, and tired of the relentless diet of chai and noodles – today is the Moray Plains – flat but, at high altitude, the weather is tough with a cold headwind. I even spotted a mini whirlwind! We have to again run past the finish and double back when my watch says 26.4 miles I refuse to run anymore and jump in the car for the last 0.2 mile – every meter counts. 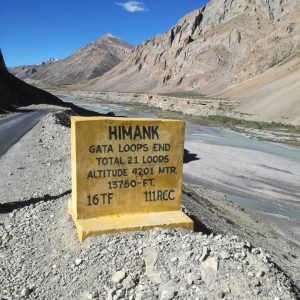 We spend the last night at the Paradise Hotel, another two-room affair but, they have electricity –I sleep propped up against the wall in the communal dorm, and it’s cold. Breakfast the next day is last night’s noodles. We start the 10-mile climb up to Tang Lang La at 17500 feet, the second-highest road pass in the world. I stop almost at every step. Lowell my old Indian friend who puts a reassuring arm around me and we press on to the top. There is snow and ice and some inappropriately dressed people but it’s busy. We have 16 miles downhill to complete the race. Nothing is easy here and the doctor gets out his blood oxygen meter and can’t get anything from one hand but records dangerously low blood oxygen saturation and a racing pulse. You are in a bad way he says, – I reply that I know, but I just want my trophy, so he shrugs his shoulders and I carry on. 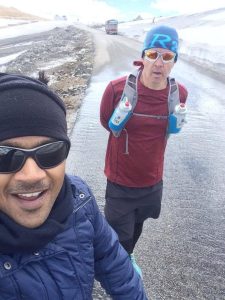 Eventually, after enduring the blazing heat, lots of switchbacks and sunburn, I cross The Hell Race finish line – a piece of tape held by two people and the race is done. Now I just have a long drive to the hotel and then the flight home. Lowell told me that I had inspired him, as he was only 27 and I was – well, a bit older than that – a truly wonderful end to the adventure.

I remain today the only Englishman ever to have completed The Hell Race Great Himalayan Running Festival. Afterwards, it wasn’t the recovery I had expected. You hear of athletes improving their performance using altitude training – I just had sore lungs for weeks and could barely speak for days! I said, never again but, you never know….

Russell Bentley – New Winter FKT on the Paddy Buckley Round!

‘HOPE 24 is built from the heart’ – GB Ultras to keep the HOPE 24 light burning!