Poles for Runners – the low down

What runners can learn from cross country skiing and Nordic Walking

I’ll be honest, I’m a big fan of using poles when I’m running.  Someone once asked whether poles could help them when running in the hills – I joked that all you need to know about poles is that they’re often called “cheat sticks” but you’re allowed to use them! This isn’t quite the end of the story though, you can’t just expect to pick up a pair and get the full benefit out of them.

In this article I’ve tried to give an overview of how poles can be used, how you can get the best out of a pair of poles and a few of the downsides of using them.

For me, there are two fundamentally different approaches you can take to using poles when running:

The first approach is where you hear people talking about the weight that poles can take off your joints and carrying them “just in case”.  The second approach comes from Nordic Walking and originally from cross country skiing where poles are used to drive you forward to your destination quicker.

There is nothing “wrong” with either approach but you’re missing out on a huge benefit if you ignore the second. 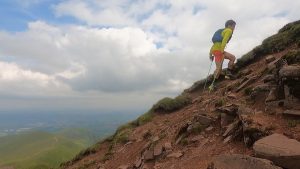 What runners can learn from cross country skiing and Nordic Walking

The key difference between the first and second approaches above is where you plant your poles when you’re running/walking.  The first approach you’ll plant your poles in front of you almost vertically and put pressure on them to reduce the weight going through your legs.  The second approach you’ll plant them at an angle (think of cross country skiers pushing hard with poles behind them) level with or behind your centre of gravity on flat terrain.  This will push you forward. It’s almost impossible to stand still and push on your poles when they’re planted behind you – you’ll have to take a step forward.  That’s a step that the muscles in your legs haven’t had to take and one that will provide extra drive towards your goal.

Runners often use poles to help them ascend hills (nearly everyone on the big alpine races such as UTMB does this) and in that situation it’s ok to plant the poles a bit more in front of you as you want upward force as well as forward force to get you up the hill.   It’s also worth saying that you can generally get more out of your poles when you are moving slowly as opposed to fast – you get more sustained power from your arms and you aren’t trying get your arms to keep up with your feet.  It’s for this reason that people often choose to use poles in the second approach whilst going up hills but put them away as soon as the terrain flattens out/starts going down and they start moving faster.  This is all part of your strategy.

If you’re going to perform at your best next time you’re out, I believe you should have strategies for everything you can think of before you start!  This means you don’t have to do any thinking deep into a race when you’re tired, it’s dark and a bit cold.   Your strategies should have plans for when things are going well and plans for when they’re not.  Poles are no different.  You need to think through before you start how, when and where you’re going to use your poles.

A basic strategy might be something like:  “As soon as I hit the bottom of a hill that’s going to go on more than 5 minutes, I’ll get my poles out and start walking.  As soon as I get to the top of the hill that doesn’t have another hill for 5 minutes or more, I’ll put my poles away and start running.”    You can refine this by looking carefully at the course and getting to know where and when these hills will be.  As you try things and practice with your poles you’ll develop more in-depth strategies and refine how you choose to use them. 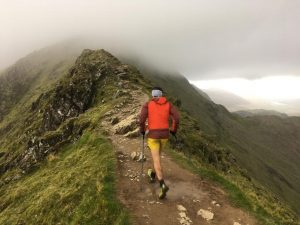 I’m often asked what the biggest mistake is that I see people making with their poles.  Whilst accidentally spearing someone behind you on a climb is a big error, my response is always, “carrying them all day but not using them”.  If you do this you’re simply carrying extra weight for absolutely no benefit.  The one caveat to this is if someone has a strategy which is to only use them in an emergency (for example, to support an injury/weak body part), however, as described above, you’re missing out on a huge advantage that the poles can provide if this is the only time you plan to use them.

There are things that you need to be wary of when using poles.  Having things in your hands can change how you run and it definitely makes it harder to navigate, eat and drink.  However, you can manage these difficulties by having a strategy which addresses these things and you’ve practiced using your poles so you are efficient both at using them but also getting them out and putting them away.

Another reason you need to practice using your poles is because they involve a completely different muscle group compared to running.  However good your technique and strategies are you need to make sure that your shoulders, arms and upper body are ready to take on the strain.  If you go from nothing to 8hrs of using your arms without training you upper body will really suffer! 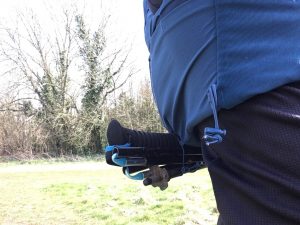 If you’re new to using poles or you need some pointers then there are a few options you could pursue:

If you put the time and effort into learning how to get the most out of poles they’ll serve you really well in any of your running adventures!